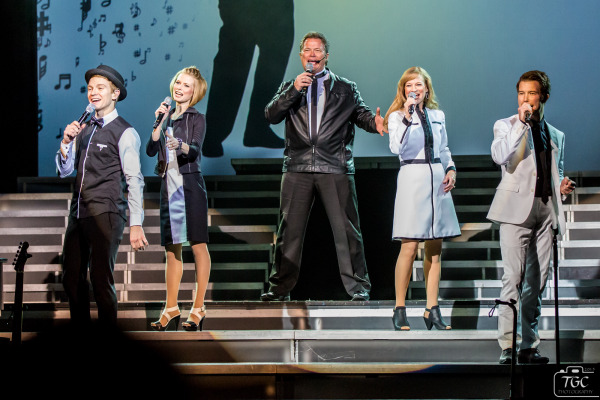 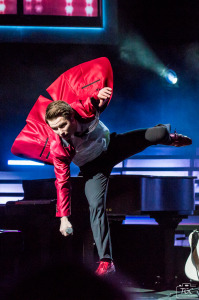 …Celebrating their 17th season performing as a family in Branson, the Bretts kick-started their season with their 2015 Bretts VIP night! Sponsered by Moe’s, ColdStone, Cherry Berry, Legends in Concert, Fly Branson and others, the VIP party included a pre-show nacho bar, music and lots of free give-aways. And that’s always a plus with Branson audiences!
Playing to a sold-out Dick Clarks American Bandstand audience, the family of five shared their shuffle playlist of songs spanning the decades. The opening set spanned the Rock N’ Roll 70s, Briahna’s Blue Suede Shoes, Brydon’s dance moves of the 90s in 90 seconds and Katy Perry’s Firework, and the brother’s basketball and dance skills, all tied together with original songs written by 3x Branson Songwriter of the Year, Andrea Brett.
Known throughout Branson for their support of veterans and the military, the Bretts did not disappoint with their touching patriotic medley. Including a personally written poem by Andrea Brett entitled “I Am A Veteran”, the patriotic tribute brought audience members to their feet in applause. Patriotism is very near and dear to the Bretts; Briahna’s husband is in the National Guard and many of their family members have or are currently serving in the military.
A fast-paced second half covered the Brett’s School of Music, a list of families favorites that they have performed together throughout the years. Michael Jackson, Garon’s ‘One Man Band” covering Stevie Wonders Superstitious, the Phantom of the Opera, and Tom and Briahna’s moving duet Bridge Over Troubled Waters were all there, just to name a few. A powerful finale featuring Garon and his original song Be The One, based on his missionary experience, brought the audience once again on their feet as the curtain closed.
The Brett Family believes in family entertainment ‘from 3 to 93’ and they also believe in Branson. After discussion of pursuing individual careers and pathways several years ago, the Bretts decided that they were stronger and more influential together than they could ever be apart, and they wanted to share their gift of music to as many families as possible! To date the Bretts have had over 4,000 live performances, they’ve been voted the best morning show, the best family show, and the best Patriotic tribute multiple times in Branson. This is a show your whole family will enjoy. After seeing them, your whole day will just be, well, “Bretter!”

Well, we can rock you down,
Dance in your face,
Sing a Phantom tune
Just to change the pace.

We can sing Fireworks,
And be proud by far
Of Briahna’s husband
In the National Guard.

Yeah, do anything ’cause we’re singin’ for fun
And Garon will be telling you
To Be the One.
So don’t you
Step on my Brett-made shoes –
Well, we can sing anything
But stay off of our Brett-made shoes!

You can find TGC Photo on…