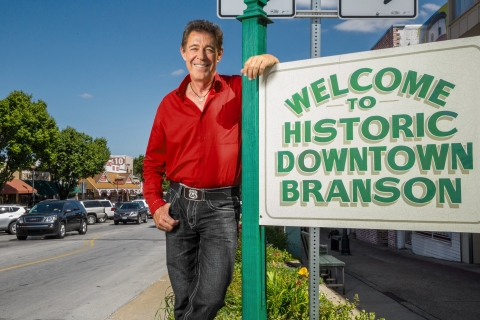 In A Very Barry Branson, Barry learns that to create a successful and fun live music show that harkens back to the era of The Brady Bunch, bright-colored leisure suits, roller skating and vinyl records, this Hollywood fixture has to do more than just show up and sing – he has to become a bona fide Bransonite. Eager to win over the tight-knit community, Barry befriends Branson’s popular music group The Haygoods, who soon have the television icon cliff jumping at the lake, jet-packing from the balcony of the theater, and learning to trout fish – a task that proves just what a fish out of water this city boy is. From performing at timeshare mixers to auditioning a slew of local performers including a break-dancing granny and a man who plays a bike pump, Barry pulls out all the stops – even arranging a long-awaited reunion with his Brady Bunch sister Maureen McCormick, whom he takes on a Branson tour.

“It’s a blast to the past revisiting the 1970s through all of its great music, which is what we do in my Branson stage show,” said Barry. “What’s great about A Very Barry Branson is that it explores all the beauty of the Ozarks, while discovering and embracing a new lifestyle and creating the 70s Music Celebration! – a fun nostalgic ride through the grooviest decade. Great American Country viewers get to join the adventure.”