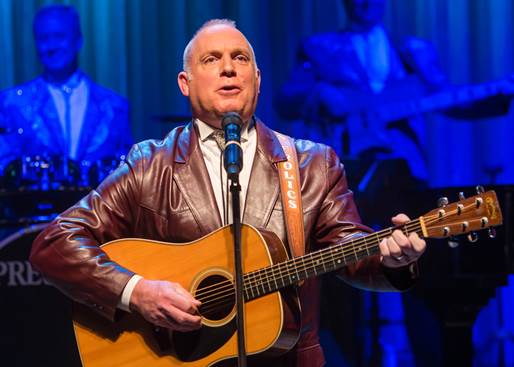 Branson, MO ― Branson’s First Family of Entertainment, the Presleys will say farewell to
long-time cast member Grammy-nominated Bruce Haynes when the curtain closes on their 2015 live
show season Saturday, Dec. 19 at 8p.m. Haynes will continue to make select appearances on the
Presleys’ TV Show, which airs on the RFD-TV network.

The senior pastor of the New Life Temple in Hollister, Missouri for the past 8 years, Haynes
says he plans to continue his ministry and mission work, and will be able to focus more time on
songwriting.

Haynes first joined the Presleys in 1979 before launching a successful music career in
Nashville. He then rejoined the Presleys’ Show in 2006 playing bass guitar and has been a featured
member of their Southern gospel quartet. He has been recognized with numerous awards from the
Christian Country Music Association, the Southern Gospel Music Association and by the Gospel Music
Association with a Dove Award for his song, “Praise His Name.” Haynes says he’s grateful to the fans
for supporting his long and successful live music career and will miss the camaraderie of the Presleys’
cast.

“I have been so blessed to be on stage doing what I love,” Haynes said. “The Presleys have
been like family and I’m going to miss them but at the same time, I’m ready to get back to doing more
songwriting.”

Tickets are still available to see Haynes and the rest of the Presleys’ Country Jubilee cast this
Friday and Saturday night by visiting www.presleys.com or by calling 800-335-4874. The first half of
the show features crowd favorites from their regular season show and the second half is all about
Christmas and the joy of the season.

Steve Presley, co-producer and drummer, said the Presleys have been fortunate to have
Haynes and his incredible talent. “We wish Bruce the very best and are happy we’ll be having him on
our TV show from time to time.”

Presleys’ Country Jubilee, Branson’s Original Show on the Strip, will kick off their 49th year at
8p.m., Friday, March 11, 2016. The award-winning show will feature country and gospel
music, hilarious comedy and loads of family fun.
The Presleys’ TV Show is seen by approximately 400,000 viewers every Saturday night on
RFD-TV at 7:30p.m. EST/6:30p.m. CST and features the talented Presleys’ cast plus special guest
stars each week.